Parenting: This is how you do it. 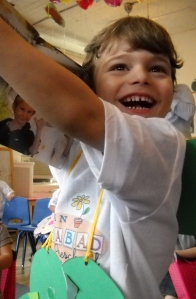 My son Harry Mose graduated yesterday. Pre-school. Another rite of passage towards adulthood and independence, albeit an early one. My wife sat next to me crying and, as usual, I sat there panicking. A lot about being a parent scares me. I don’t want to damage him psychologically, and I’d love to support him regardless of what he does. But I imagine being supportive can be difficult at times and I wonder how I’ll do as Harry gets older.

Fortunately, we can learn from our elders, and the other day I found some old letters that gave me perspective and hope…

This Sanyo RD5030 and I looped beautiful music together.

1986. I was a budding young creative type, ideas flying in all directions. Despite being completely tone deaf, I had aspirations of being a part of the music scene. Then I read about the tape loops created in the 60s by minimalist Steve Reich—“music” created with multiple tape decks only—and I knew I was in business. Without hearing any of his work, I took a 1974 recording of my father and my brother, set up three cassette decks and after many late nights in the family room under headphones, made “8 Years Old.” (It’s 3 minutes of looped voices, which I’ve included at the end of this post).

I heard there was a bi-monthly late night experimental music program on WXPN, University of Pennsylvania’s radio station. Hosted by John Hudak, I listened one night and while it wasn’t my cup of tea, I sent John a copy of “8 Years Old.” (Not sure why, actually, but like I said, my head was flying in all directions those days.) He sent me this flattering postcard saying, among other things

No way! I thought. I was thrilled and told my mother and my buddies. The night of his show (which began at midnight I believe), I camped out in front of the stereo, headphones on, tape recorder going. The first 30 minutes came and went without my piece playing. So did the next 30 minutes. And the next after that.

What is it like to listen to hours of experimental music against your will? Well, there’s no metaphor for it. In fact, it is its own metaphor. It’s what’s used metaphorically to describe something else that’s painful and unrelenting.

I drifted off, my hope of hearing my brother and father on the radio fading away. At sunrise, I woke up on the floor next to the tape deck. Reviewing what had been recorded after I passed out, I discovered that I had been boned.

I don’t know what I daydreamed would happen after having a 3 minute experimental tape loop play on late night college radio (fame? fortune? chicks?), but I was severely bummed out that morning. (I also had a rug burn on the side of my face.) My mother was very sympathetic, and before I left for the bus, she gave me this note. It said, in part:

I know you’re disappointed. Understandably so. But don’t be too discouraged.
Unfortunately, creative people pay a price for their gift. They often suffer rejection, set-backs, lack of interesting on the part of others, etc. You’re a little young to be experiencing these things—but it will help toughen you for the future.
Remember, I love you and will always stand by and try to be supportive of the little failings and your big successes.

I kept it even though I don’t know how much it helped me at the time. (Hey, I was sixteen. I’m sure my reaction was something along the lines of, “Yeah, nice, Lady. This and 8 bucks will buy me a cassette at Strawberries.”)

But finding it the other day, my immediate reaction was, “Y’see. This is how you do it. This is how you raise a child.” Every word my Mom chose was on the money. And the thing that really blows me away is that it’s a straight line. She wrote it long-hand, in ink, and there’s not a single crossed-out word 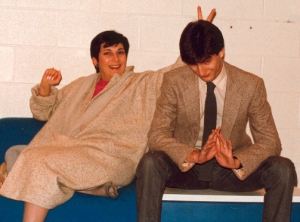 or any back-stepping. If I had to write something like this, I’d draft the damn thing in Word, and dwell on every sentence like I was Ayn Rand writing John Galt’s speech at the end of Atlas Shrugged.1  But Mom knew exactly what to write, without any second-guessing.

So, yesterday Harry “graduated,” and with every step he makes, the more excited and afraid I become. But I’m lucky that I was schooled right. Hell, when the time comes for me to write a note like this for my Boy, I’ll just grab my Mom’s note and, well, plagiarize it. Thanks, Mom!

8 Years Old
This isn’t for everyone, but I’ll admit it has the same effect on me today that it did in 1986. After a brief introduction by my father and brother Paul (who was eight years old at the time), it’s a single phrase looped for a couple of minutes. There’s two tracks of it, one in each ear, and one is running slightly faster than the other.

The effect is that as long as the two tracks are out of synch, your head is split in half, but as they gradually fall back into synch, you’ll feel your halves come together as one, even if only for a brief instant. Like I said, not for everyone, but thanks to the iPod generation, more people are wearing headphones than ever, which is the only way to hear this.


BACK TO POST 1 It took Rand two years to write the 70-page speech.

5 responses to “Parenting: This is how you do it.”