Spring is here and that can mean only one thing: baseball. But specifically for me, it can mean one more thing: anguished reminders of my panicked youth.

Naturally and obviously, I was a pipsqueak in my early days, neither muscular nor agile. (My father used to say that I wasn’t likely to win the title “Mr. Universe,” however I might win “Mr. Barney Fife.”) But I was also not competitive, which didn’t sit right with the prevalent vibe in working class Maple Shade, NJ, in the 70s. Oh, sure, the parents and coaches of organized sports would say the requisite, “Winning isn’t everything,” but they certainly didn’t mean it. This was no Special Olympics, where “everyone is a winner.” Hell, no. Long before there were Soccer Moms, there were Baseball Dads, and, for reasons I can’t recollect, I joined the CYO (aka the Catholic Youth Organization) baseball league. No one in my family made me play organized sports–as I’m sure was the case with a lot of my friends. I’m extremely grateful that I had neither a Soccer Mom nor a Baseball Dad, but joining the CYO plunged me headfirst into the world of “Winning is Everything.”

How much of a pipsqueak was I? How traumatic was the experience of playing organized sports? Here’s a brief story, a nugget, that answers both questions. The first day of practice for the Maple Shade Pharmacy Dodgers—my first day on the ballfield—the coach (a Baseball Dad for sure) decided to scope out his new team’s hitting skills.  We all went to the plate, one after another, and he threw us easy pitches. He let each of us stay there until we made contact with the ball, no matter how long it took. He’d shout encouragement (“Atta boy!” “Yer a natural!” “Good eye, good eye!”) and if necessary make the pitches super easy for those that were smaller and more frail. When it was my turn, I swung and swung and swung. And swung. Everyone watched. After a while—minutes in reality, years in Sweat Time–my teammates ran out of laughter and the coach ran out of encouragement, patience and ultimately pitches. “OK, let’s give it a rest. Give someone else a chance.” So, what is Shame? How about watching 15 of your peers look awkwardly away from you. Actual bullies and assholes were saying, “Aw, man. Give the kid a break.”

That was 1978 and miraculously I stuck with it, and by the following year, I was half-way decent. In fact, I toggled between pitching and playing first base, which means either I really blossomed or the rest of the team really sucked. Frankly, we were a pretty crappy team, hovering around 5th place in a league of 7 teams.

As the season progressed and April became May became June, one thing was clear: the Burlington County Pirates were unbeatable. It was like they had tenure for victory. Looking at their winning scores (i.e. 28-0 over the Astros) you’d think it was a football game.

Towards the end of the season, the Dodgers were due to face the Pirates one last time, or, as we on the Dodgers assumed, one last beating. Their record by game 16 (of an 18 game season) was 16 Wins and 0 Loses. Shit.

(At this point in the story, now that David and Goliath have been established, it’s best to imagine you’re watching a lost episode of Ken Burns’ Baseball.)

Monday, June 25, 1979. Late afternoon. The Dodgers’ manager Jack Graham picks me up on the way to Lower Field. He tells me in the car that I’ll be the starting pitcher. “Really? Are you sure?” I kinda sucked at pitching, but figured he was throwing in the towel…and I was the towel. 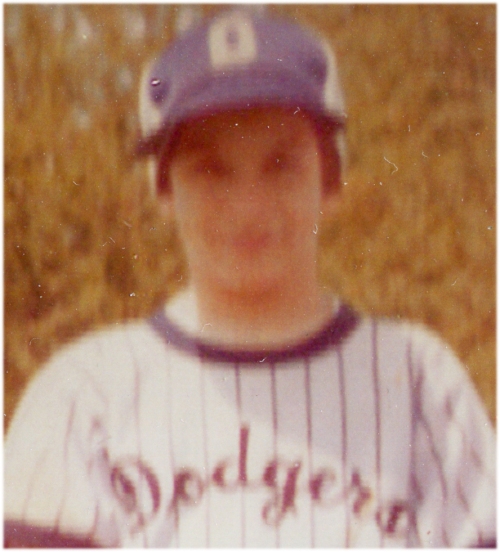 Even though I was only 10, I embraced some of the traditions of a major leaguer, including superstitions. For example, it was my belief that if my first pitch of the game was a strike, then I’d win; if it was a ball, I’d lose. My first pitch that day was a strike, and instantly I was no longer superstitious.

I gave up a few runs pretty quickly. Before long, the Pirates were up by 6. We had a slow start, with our Worst against the Pirates’ Best. Case in point: Johnny Cutillo ruined a promising inning for with his unassisted triple play (WTF?!). I mean, come on! It felt like we were being smothered with a tennis racket: it took forever, hurt like Hell, and we could watch the whole thing happening.

But, miraculously, the tide turned. I kept them at only 6 runs, which against the Pirates was Nolan-Ryan-esque. In fact, I got 12 strikeouts. And when we were at the plate, we were on fire! In the second half of the game, we scored 12 runs, thanks to a couple hits apiece from my buddies Tommy Gee, Walt Severns, and catcher Mike Rowan. It was like the Bizarro version of a CYO game.

As we inched closer to the last inning, the tension mounted. For sixteen straight victories, the Pirates had proven they were never more than a pitch away from a multi-run rally. But I held my own and, unbelievably, there were more people in attendance in the last inning than there were at the beginning.

I pitched a strike for the final out of the game. I leapt from the mound, arms straight up in the air. I’d say I was impersonating relief pitcher Tug McGraw’s victorious jump when he helped the Phillies win the World Series—except that didn’t happen until 1980, the following summer. (Hmmm…was Tug at that CYO game…?)

It was nuts. My team went ballistic. We ruined the Pirates perfect season. Fuckin’ A. How big was this victory? Well, here’s what the Maple Shade Progress had to say, but screw that. Here’s a better illustration: recently I told this story to my old friend Bobby. He grew up with all the players, so when I was talking about how my team lost a lot and the Pirates won a lot, he kept nodding, saying, “Sure. Sure. What do you expect? Makes sense. Those guys were killers” and so on. But when I got to the winning pitch, he said, “Get the fuck out!” and high-fived me. (You know what they say: if a 30-year-old story is high-fivable, then it’s bloggable.)

Afterward, the manager gave me the ball. “You earned this, Stephen.” (Frankly, he might as well have said, “Here you go. It’s never going to get any better than this.”) A few days later, at the season wrap-up pool party, I got my teammates to sign it. It stayed in my mom’s basement for a couple of decades, but since my son’s been around, I’ve had it on display, on a shelf, right next to my cat’s ashes.

I know they say winning isn’t everything, but it sure as Hell was that day.

(A BIG Thanks to my old teammate Walt Severns for holding onto that team picture for decades. Thanks, Bro!)

Filed under My Youth

Don’t you see? The rest of the country looks upon New York like we’re left-wing, communist, Jewish, homosexual pornographers? I think of us that way sometimes and I live here.

Of course, that’s Alvy Singer talking, Woody Allen’s character in Annie Hall. When I’d watch that film as a high school student in South Jersey, longing to move north, that line made more of an impression on me than others in the film (which is saying a lot). None of those labels (communist, Jewish, etc.) applied to me, but being an outsider in high school, I certainly knew the feeling of being labeled and mislabeled.

I’ve been an NYC resident a couple of decades now and still see the truth in Alvy’s comment, particularly the how the “rest of the country looks upon New York” part. Here’s some examples of when his observation comes to mind…

The 1974 film The Taking of Pelham One Two Three presumably shows an atypical day in New York City, one where a subway car is hijacked and its passengers held for ransom. Although a few different posters promoted the film, here’s the one used the most worldwide. It’s a POV shot of what a passenger might see if peeking into the next subway car…

I expected this didn’t seem so farfetched a sight to the rest of the world, because as they all know (or imagine), it’s commonplace for New York City subway passengers to point semi-automatic rifles at a mother and her children, right?


Here’s another instance. A buddy of mine, Jonah Kaplan, made a student film in 1990. It’s called Bicycle and includes an intense recreation of the perils of bike riding in NYC (his home town). Here’s a 30 second sample…

(Sadly, the internet is a total letdown here. To see this 7-minute film on the big screen, in a packed theater, is to enjoy a 3D-like experience that makes Avatar look as 1 dimensional as its script.)

Jonah’s film enjoyed enormous success on the festival circuit (it played in almost 20, many of them in non-English-speaking countries). He admits that it was accepted at foreign festivals in part because there’s no dialog in the film—but he says the audiences generally felt that “this is what living in New York is like all the time.”


My final example comes from 1977, an infamous year in the city’s history (detailed thoroughly in Jonathan Mahler’s Ladies and Gentlemen, the Bronx is Burning). Political upheaval. Son of Sam. The Blackout. More than usual, the outside world perceived NYC as a blighted metropolis on the brink of disaster or self-destruction. And in the midst of that, the Yankees were in the World Series. The pressure was on since they hadn’t won one in 15 years, an unfathomable drought for New Yorkers. (Man, sometimes I wish the average Yankee fan could spend a few years living in Philly.)

By Game 6, the Yankees had won three games, and the LA Dodgers had won two. That night, Reggie Jackson made history by hitting 3 home runs, in 3 consecutive times at bat, in only 3 pitches, off 3 different pitchers. (Un-believable.) His last was in the 8th inning, and when he took the field in the top of the 9th, the Yankee fans were bloodthirsty for victory and couldn’t contain themselves. Even though security had been quadrupled, it wasn’t enough: some over-enthused fans threw firecrackers towards Reggie in right field, forcing him to take drastic measures.

This two minute clips begins with his reaction to being pelted by the explosive love of his admirers, and concludes with the final out of the game and its aftermath. It’s very famous footage, but if you’ve already seen it, I encourage you to give it another look—and this time pay close attention to announcers Howard Cosell and Keith Jackson…

Now I’ve seen plenty of footage of World Series victories: players jumping on each other, fans storming the fields, and so on. But this clip is seriously fucked up. It’s not so much like “The Giants win the Pennant! The Giants win the Pennant!!” as it is “Oh, the humanity!” Cops with raised nightsticks, kicking fans on the ground; a cloud of dust rising above the melee; and poor Reggie Jackson running for his life, bodyslamming New Yorkers.

But Keith Jackson and Howard Cosell make no allusion to the violent insanity, no cries for someone to declare martial law. Something tells me they were saying to themselves, “Well, what do you expect? This is New York, isn’t it? Just another night in the Big Apple.”