Zitner’s Butter Krak and the Addiction 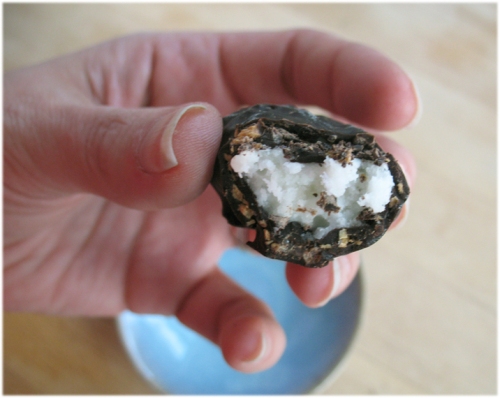 Show of hands who’s ever had a Butter Krak Egg? If you raised your hand, then please bond with me at my guest post at Words to Eat By. If you never had one—and are partial to cocoanut (toasted and otherwise), buttercream and dark chocolate–then you simply must get all the details here.

And while you’re there, you can see what happens when a 4-year-old gets his first taste of this highly -addictive and insane seasonal, regional treat.

When I saw Toy Story 3 a few weeks ago, I immediately recognized that the last shot of the film mimics the opening shot of Toy Story, bookending the three films with a kind of visual closure. (I have to be vague here for the sake of those who’ve yet to see Chapter 3 in the saga of Woody & Buzz.) It was a fitting ending. Perfect, really. I strongly suspected that even the clouds were in identical formation as on Andy’s wall in Toy Story.

A couple of weeks later, I took Harry to see it, Harry being my 3-and-a-half-year-old son and fellow Pixar junkie. Even though by the end of the film I was an emotional wreck (you could have picked me up with a blotter), I had enough composure to pull out my phone and snap a picture of the closing shot so I could do a handy-dandy comparison in Photoshop. Turns out I was right about the cloud formations:

As cool as it is, however, I didn’t think this qualified as “blog post” material. This was so obvious an allusion that it would be silly to devote too many words to it. My prior Pixar posts dig deeper than just comparing shots between their own films. 1

So I put the comparison up on Facebook, which is a great place for things light, airy and fleeting. Moments later, my wife was the first to comment:

Since she was in her corporeal form only 20 feet from me, I continued our conversation in person (call me old fashioned): “It’s so obvious it isn’t even blog-worthy.”

“Oh, come on,” she said. “You could write something about that. Trust me: most people didn’t notice that clouds/wallpaper reference.”

I smelled a dare.

Let me explain a little about my son. He’s good at shit like this. He’s got a steel trap of a memory. For example, when he was 2 years old, if WALL•E were playing in another room, he could tell us what scene it was just by listening to the sound effects and music cues. OK, OK, I know I’m just a proud Dad and everyone thinks their kids are geniuses or Mozart-esque, blah blah blah, but trust me: when it comes to this kind of thing, he’s got the goods.

So, I put the Toy Story 3 still on my computer screen and called Harry into my office…

So either my kid is way too much like me or I’m onto something. But, hey, at least I got a post out of it!

BACK TO POST 1 Shoot, I’ve blogged about Pixar films in relation to John Ford, Nichols & May, Schwarzenegger violence and obscure sound effects from Raiders of the Lost Ark.

(Here’s the first of my clip-free posts. Gratefully, I have a backlog of topics about music and books that will allow me to keep things feeling business-as-usual, until this YouTube mess is sorted out. I’ll keep you posted on my progress, but at this point, I’m definitely looking to post my clips elsewhere. If anyone has any suggestions, I’d love to hear them.) 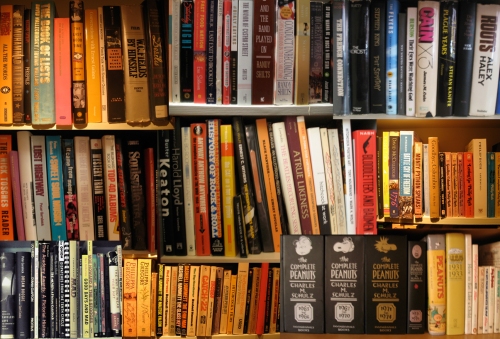 I love books, and I love collecting them. I don’t know how many I own, probably 900. All shapes and sizes. As you can imagine, a lot are about film and music. And comedy. Nonfiction books about What is Funny. In fact, most of these books are nonfiction, with an alarming amount about the contributions of gay, black or Jewish people to 20th century American popular culture, aka what they didn’t teach us in school. (I’m prone to lose myself in a reverie, staring at some of my shelves. I’ll sigh and say, “I have so many good books.”)

Currently, I have around the house stacks of recently-acquired books (mostly used), waiting for some shelf-space, which sadly, won’t happen. My daydream is to one day own a used bookstore; until then, I’ll be content to live in one.

My wife used to be in publishing and she, too, loves books. (The centerpieces at our wedding were stacks of used books from our collection, bound in a blue ribbon. One of my happiest moments that day was seeing all of our friends and family holding and talking about books, books, books, divvying them up.) I was very proud to build in our kitchen a library for Debbie’s cookbooks. It’s great to see her study the spines, like an artist in motion, concocting another great meal.

Gratefully, our son is following suit, and frequently I’ll see Harry Mose sitting in his rocking chair, perusing a book like some miniature Alistair Cooke.

Anyway, the photograph below is the book room of T.E. Lawrence, aka Lawrence of Arabia. He also loved books, and later in his short life, in the 1920s, he bought a cottage in Dorset, England, a cottage he named Clouds Hill. It had only four rooms, very sparsely furnished. A couple of chairs, a fireplace to heat tin cans of food, a few sleeping bags.1 On the other hand, one of the downstairs rooms was devoted entirely to books, 1,250 of them, from floor to ceiling, with little else except a big-ass bed on which to read them. 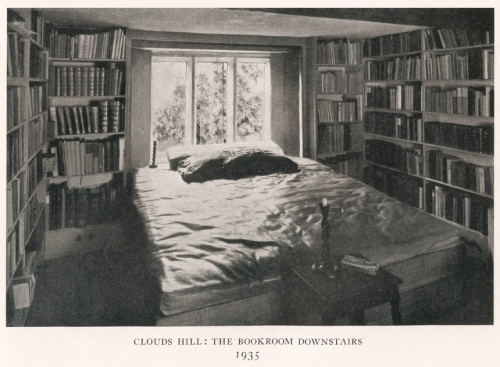 Yep, this is my dream room. There will come a time, down the road, when I’ll own a home, hire a carpenter, give him a print out of this picture, and say, “Go to town.” Until then, my family will just have to live with stacks of books around the house.

(That’s the end of the post proper. But if you want to read how I got the picture, keep reading. Consider it a bonus post.)

In 2005, I found this picture of Lawrence’s book room, in a small library in an even smaller town in Maine (yeah, the town was smaller than its library). The town is St. George, and the library is the quaint Jackson Memorial Library.

Debbie and I were vacationing in a nearby cabin, and we’d frequent the library to use their internet. While one was on the computer, the other would comb the shelves. I found the book–T.E. Lawrence by His Friends, published in 1937, first edition–and while thumbing through it, stumbled across this picture (page 333). I swooned.

I photocopied the picture and posted it next to my desk at home, a kind of carrot on a stick, my idea of domestic tranquility.

When I began this blog, anything that I consider interesting or rare became fodder for a post, including this picture. But my photocopy was weak in detail. So I tracked down a copy of the book at the ginormous New York Public Library, on 42nd St. I wouldn’t be allowed to check it out, but I planned to sneak a picture of it with my phone.

I went to the library, which is very stiff and serious. Austere, I guess they’d call it. There’s millions of books and a heavy atmosphere of history and enforced respect. Intimidating and, sadly, condescending. In order to look at this seventy-year old book, I had to stand in three different lines, fill out two forms, and wait almost an hour. By the time they had posted my call number, I felt like they’d be handing me a Guttenberg Bible. Instead they handed me a line of bullshit…

They’d lost the book. In fact, they could tell me only one thing with certainty: Among the branch’s 15 million books, scrolls, newspapers, etc., they only knew where it wasn’t, that is the shelf it was supposed to be on. I left in a huff, giving the literate finger to the cement lions guarding the legendary building.

I went home and immediately called the modest Jackson Memorial Public Library of St. George, Maine. A very nice lady took the call. I asked her if she still had the T.E. Lawrence book. She put down the phone, and picked it up about 40 seconds later, saying, “I’m holding it right now.” I described the picture and it’s relative location within the book.

I asked her if she could scan it for me.

“Oh, um, let’s see…” My mind was racing through the most complicated solutions imaginable, i.e. find someone local with a scanner and get him or her involved to do Lord knows what–but it didn’t matter because the librarian cut me off.

“Sure. You’ll take care of it, right?” She said this matter-of-factly, not in an accusatory manner.

“Hey,” I said, “Just look at that picture. That’s my dream room. Do I sound like someone who’d disrespect a book?”

“Of course not. Just give me your address and I’ll send it out today.”

And that was it. The wonderful and trusting Yvonne (the library’s director) kept her word, and I kept mine. When I received the book, I noticed the inside back cover had one of those wonderful, old school library pockets, the one for the card that would keep track of when it was due back. (So, I guess I do mean “old school” and not “ol’ skool”!) There’s where I got an idea why Yvonne felt she could live without the book for a week or so: T.E. Lawrence by His Friends had been checked out only 14 times in 63 years. (So cool of them to keep it on their shelves! I guess it had been waiting for me all those years.)

Anyway, if you ever get to St. George, Maine (on a peninsula off the mid-coast of Maine, just south of Rockland), be sure to check out the local library. You’d be surprised what you might find!

BACK TO POST 1 Yep, a couple of sleeping bags. One was embroidered with the word “tuum” (Latin for “yours”) and was for guests (such as authors George Bernard Shaw, EM Forster and Robert Graves); the other sleepiing bag was labeled “meum,” (Latin for “mine”) which was the one Lawrence would use. Also, plumbing was installed only after his mother said she was going to visit. This guy liked it lean.

Filed under Books, Plucked from Obscurity

Harry Mose at a "mixing board," Brooklyn Children's Museum, Jan, 2009

Today’s post is more of an introduction than an actual post. I don’t know if it’s nature or nurture, but my son, Harry Mose, is picking up some of my habits and fixations (i.e. film, sound FX, putting metal objects to my ears). Here’s some evidence. Yes, the clip is 13 months old, but, hey, my posts can’t all be diatribes against a wing of the entertainment industry.

And just so you don’t think his passion or attention to detail are 100% my doing, I’d like to point out that my wife is pretty intense, too.