My Lai, Alfred E. Neuman and the ‘Loss of Innocence’ Rap

The massacre at My Lai [pronounced Me Lie] occurred in Viet Nam in March, 1968, and the resulting cover-up, exposure, trial and press coverage from 1969 through 1970 greatly increased the US civilian opposition our involvement in Viet Nam. Tonight, PBS’s American Experience is airing My Lai, a compelling new documentary by Barak Goodman. Here’s the promo for it.

I’ve seen it. It’s great storytelling and I strongly recommend it. But for here and now, I’m going to put aside the American Experience and tell you about My Experience (which happens to be as American as you can get).

Like so many people in the last sixty years, my childhood was influenced by Mad magazine (and when I write “people” I mean “guys”), and Mad poster child Alfred E. Neuman was one of my heroes, a sort of spokesman for the irreverent. I regularly trolled the used comic book shops looking for old issues, and in 1980, on one of these junkets, I came across a 1971 issue of National Lampoon, the counter-culture humor magazine that was a direct descendant of Mad. The cover referenced Alfred E. Neuman but being only eleven years old, I didn’t understand what the joke was.

Mad’s Alfred E. Neuman and a portion of the National Lampoon cover

OK, now let’s skip to two weeks ago. I’m in theater watching an advance screening of the My Lai documentary. Lt. William Calley was a key figure in the massacre, was found guilty for his actions and sentenced to life imprisonment. To many, he was the face of My Lai, and controversy surrounded his trial and conviction from all sides, left and right. In the midst of the documentary, there’s this photograph of him: 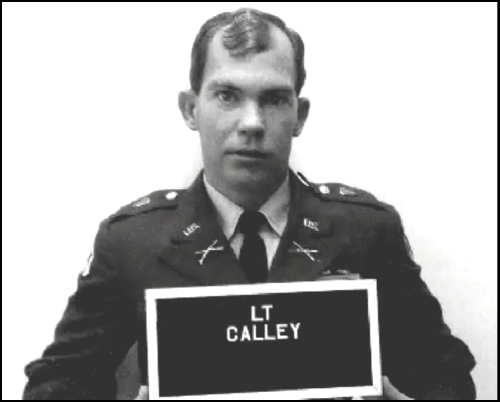 …and in the audience, I’m the one person who said “Oh, shit!” for a reason not related to war atrocities. I mentally rolodex back thirty years to a comic book store in South Jersey and all the pieces fell into place: 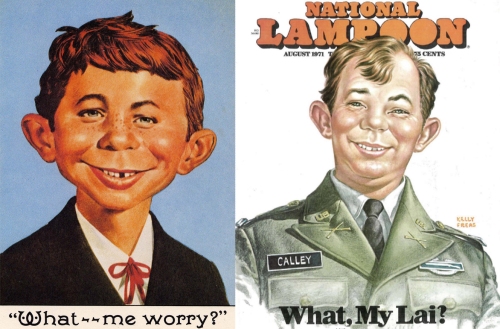 For the last two weeks, with all the cultural info now at my fingertips (unlike back in ’80 when knew nothing about that war), I’ve been pondering that cover. I know it’s (purposely) tasteless but I couldn’t put my finger on why. I suspect the My Lai/Me Worry pun made the cover irresistible to the folks at Lampoon. As for morphing the face of Neuman into Calley, well, if you see enough pictures of the latter, you easily see their resemblance. (And with cover art done by former Mad artist Kelly Freas, it only helps it’s authentic Mad magazine look.)

Ultimately, placing myself into the mindset of an American living through the Viet Nam war–something Goodman’s documentary does brilliantly, by the way—I noticed the cover melds a 50s icon with a late 60s icon. The fact is if you were in your twenties in 1971, it doesn’t matter whether you were burning your draft card or be burned by the draft–you were raised on Alfred E. Neuman and you had a strong opinion of the war. This cover artfully conjures that whole Loss of Innocence rap I always hear from those who lived in America between Kennedy getting shot and Nixon resigning. (Let’s face it: you old guys do go on about that.)

Anyway, if you made it this far that means you’ve seen the magazine cover. Now I suggest watching My Lai tonight on PBS. And afterwards, if you want more on the twisted relationship between the Viet Nam war, the media and the Loss of Innocence, just Google “Lt. Calley Esquire cover.”

The Many Faces of Jaws

Thirty-four years ago, I saw Jaws for the first time. My grandmother took me for my birthday, and nothing’s been the same since. Actually, the impact began before I saw the film in ’76. It really started the summer before with the outrageous hype and this poster…

This legendary image actually began as the paperback’s cover, drawn by Roger Kastel, an artist under contract with Bantam Books. If you look closely—and you don’t even have to look that closely—you can see that the woman (“Chrissie” from the opening of the book/film) is pretty damned naked. Besides seeing the film for my seventh birthday, I got the soundtrack, too, and would listen to it under (big) headphones while staring endlessly at this cover. In fact, for my birthday party that year, I snuck several of my guy friends into the bathroom so I could clandestinely show them the naked woman on the cover—but then my mother busted in and broke us up. (How did she know?!)

As a kid who loved humor as much as movies, the inevitable Mad magazine cover was equally as important in my early years. (Hell, I knew their parody, Jaw’d, months before I saw the film.)

But there is other artwork for Jaws worth noting. First, the original 1974 Doubleday hardcover takes a little thunder away from the iconic movie poster. This is clearly more esoteric, but the basic notion is already in place. Also, it too has the fishhook “J.” Lastly, unlike Kastel’s painting, this one evokes a night attack, which adds an extra chill to it. (It’s a shame no artist is noted on the dustjacket.)

In 1978, Jaws 2 arrived, and so did this lame-o poster. This took a great thing and made it stupid. I mean, sure the original was hyperbole, but this one was just plain dumb. I knew it even at the age of nine.1

What was a real drag, however, was that Universal Pictures didn’t stick with their teaser campaign… 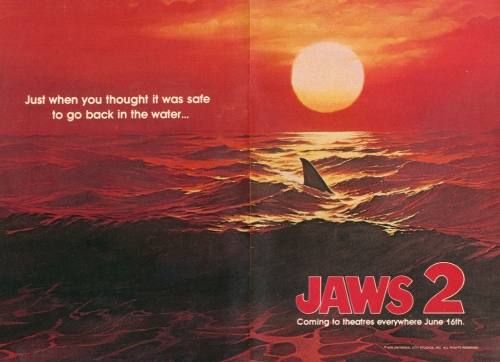 Not only did it have the best possible tagline (that film’s only legacy), but it had a new look: Evil was reapproaching and it was all red, red, red. I saw this in TV Guide a month before the film was released and it knocked the wind out of me. It’s a shame Universal chickened out and played it safe, poster-wise.

Of course, this notion of Universal selling the viewer short has continued. If you read my first post, you know the disdain I have for the re-mixed Jaws on DVD. But my anger covers more ground than that. Have you seen the DVD cover artwork? Check it out…

It’s shiny so it doesn’t scan so easily. Therefore, I’ll point out the discrepancies between this version and the original it’s based on. The differences between the sharks are silly and almost negligible. The new shark is much more robotic and less defined. It’s more like an arrowhead and less like a fish. The eyes, however, are more lifelike but they look like they’re crossed. Also, they added some teeth to his upper jaw; I guess he wasn’t menacing enough in the original poster.

But it’s Chrissie that gets the most damage:

Besides the fact that they changed the position of both her arms (why?), they also added enough foam to remove any hint of her naked body below the surface. I could go on about the ugliness of PC revisionism, but what’s the use? I can’t figure these people out. The poster in its original form was perfectly fine promotion for 30 years, for the paperback, the film, the soundtrack, the VHS tape, etc., so why change it?

I will say this: that little bit of tease in the poster, as slight as it might be, happens below the water’s surface, and I always thought that’s what draws the shark: It’s what he sees. (It’s worth noting that the tagline for the film was “She was his first.”) So if you obliterate that detail of her body, obscure it with foam, well, it removes a layer of horror, the psycho-sexual kind. And you may remember that Chrissie’s death in the film also has plenty of sexual overtones.

So all that new fancy packaging gets us is a shiny, cross-eyed robot-shark staring at a sexless, glowing foam-creature. Hmmm…It makes me think of a reaction from “Clod Hopper,” Richard Dreyfuss’s character in Mad magazine’s Jaw’d: 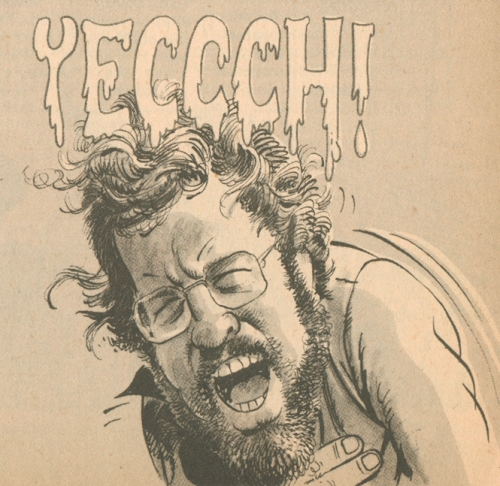 BACK TO POST 1  For what it’s worth, I think the cover of the Marvel Comics tie-in with Jaws 2 hit the nail on the head. 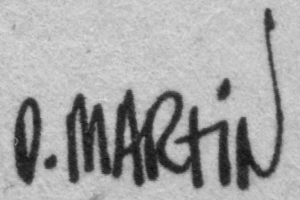 I could go on and on about Mad Magazine artist and genius Don Martin.

About the bendy fingers and feet…

About the final panels with the deadpan stares right at us…

Or about the sound FX…

But instead, I’d like to talk about this book: The Completely MAD Don Martin. It came out a few years ago and has every drawing the man did for the magazine. It’s ginormous. I’m not kidding. The damn thing weighs 16lbs. It’s asking price then was $150 and I never saw it lower than $100.

Well, the good news (and bad news, sadly) is that it sold poorly enough that you can now get it NEW for about $32 at either the Strand in NYC or via sellers on Amazon! At that price, you can’t afford to not have it. Most are shipping it for a measly $4! I say run—don’t walk–to your nearest computer and order this right away.

I leave you with (perhaps) my favorite Don Martin comic, from 1974…