Neil Diamond and The Last Waltz…WTF? (or An Appeal for Neil)

Recently, Neil Diamond was inducted into the Rock and Roll Hall of Fame, which prompted the requisite confusion that accompanies any sentence with the words “Neil Diamond” and “Rock and Roll” in it. A few years ago, I would have joined in on the Neil-bashing, since I, too, have had contempt for him for most of my life. Luckily, I have a few cronies who’ve set me straight.

Honestly, my fandom is limited mostly to his first singles, the mid-60s period when he was on Bang records and rose to stardom on such hits as “Solitary Man,” “Cherry, Cherry,” and “Kentucky Woman.” Jesus, they’re great songs. And anytime I’m a late-comer to an artist, film or LP, I rack my brain to figure out why, why, why? Why have I lost decades I could have spent listening to “Girl, You’ll Be a Woman Soon,” which I now have to make up for, replaying it morning, noon and night (much to my wife’s frustration).

Why did I forsake you, Neil?

The answer is simple: Martin Scorsese’s 1978 film The Last Waltz. 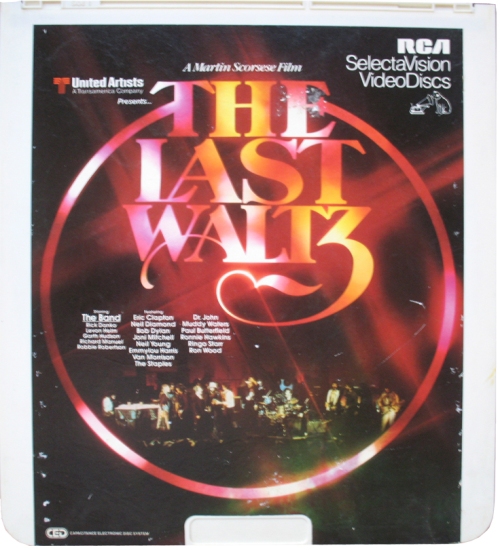 I got the film on an RCA CED videodisc in 1983. My brother got it, actually, convinced by some elders that any self-respecting rock and roll fan should love that film. (Sound advice.) I was unfamiliar with most of the performers in the film, and I inched my way through it a song at a time. I’d hear an Eric Clapton song on the radio, then I’d queue up “Further on Up the Road” in The Last Waltz. I’d notice “Mannish Boy” in Risky Business, so I’d revisit Muddy Waters’s version in the documentary. I’d see Dr. John on SCTV and –boom–I’d have a fresh take on his performance from the Scorsese film. And so on. Before long, I was wearing a scarf around high school, à la Robbie Robertson (see below) and named my first car “Ophelia,” after the Band song.

But one ongoing sticking point was that damned “Dry Your Eyes” number smack dab in the middle of the film. In 1983, at age 13, I already had a dim view on Neil Diamond. He was beloved by people’s parents, but not for me and my expanding rock and roll palate. He was too busy being that jazz singer who stopped bringing flowers to Barbra. I was alienated by his presence in Scorsese’s film, thought he was a stiff snooze, and that this was the last nail in Neil’s coffin: I wrote him off and closed my ears and heart to All Things Neil. He was dead to me.

And if you’re still reading, you probably fall under one of three categories: 1. Neil Diamond fans who will follow him anywhere; 2. Last Waltz fans who are strongly opinionated about his appearance in the film, pro or con; or 3. someone who just saw the film and wonder why that sunglasses-wearing sore thumb was on the stage. If you’re in that last category, than this post is for you. This is what I wish I could have read when I was 13 years old.

In the next few paragraphs, I’ll explain why Diamond was there that night; why his performance misfired; and how it might have gone down if it were handled differently.

Intellectually, Neil’s participation in The Last Waltz makes some sense: Band member Robbie Robertson had spearheaded the event and wanted representation from all the aspects of the Band’s sound, their “musical wheel,” as he called it: Southern blues, Canadian folk, New Orleans funk, and so on. Neil Diamond represented the NYC-based “Brill Building Sound,” named after the building on Broadway where several talented songwriters wrote hit after hit in the 60s, writers that included Leiber & Stoller, Goffin & King, Bacharach & David, and Greenwich & Berry. Although the Band sound didn’t exactly scream “New York City,” Robbie had an affinity for that era of popular song writing. In fact, he had just produced Neil Diamond’s latest LP, the critically-acclaimed but poor-selling Beautiful Noise. (You can raise a cynical eyebrow now, if you like.)

So there is a heady logic to Neil taking the stage after Joni Mitchell and before Van Morrison. After that, logic falls apart at every turn, blame falling entirely on the choice of song. Whether or not “Dry Your Eyes” is a good song is irrelevant; it’s a woefully inappropriate song for that concert.

Neil Diamond was one of the only two performers that night to perform exclusively new material. Every artist that performed more than one song shrewdly included one tried-and-true house burner: Neil Young wowed them “Helpless,” Van Morrison slayed with “Caravan,” Muddy Waters destroyed with “Mannish Boy,” and so on. And the artists who did perform only one song, each chose a surefire classic: Dr. John brought the house down with “Such a Night,” Ronnie Hawkins’s “Who Do You Love?” turned the Winterland into the world’s largest backwoods bar, Paul Butterfield (dueting with Levon Helm) took everyone on the “Mystery Train.” Besides Neil Diamond, only Joni Mitchell did all new material, but I don’t think anyone was expecting her to come out singing “Help Me.”

You could argue that Neil’s peers played it safe—or you could say they gave the fans what they wanted. Irregardless, Neil Diamond comes out, sporting stand-offish sunglasses and “looking more like a movie producer than a musician” (to quote music journalist Barney Hoskyns) and does a song that no one could sing along with, a song that just doesn’t swing, y’know?

And there’s the rub: Robbie wanted representation from the 60s NYC pop scene—but chose a song written in the 70s, on the West Coast—coincidentally, a song that just happened to be co-written by Robbie Robertson. (Being a huge Robbie supporter, that detail has always pained me. It’s just reeks of opportunism.)

If Neil had “played it safe” and performed something he’d literally written in the Brill Building, there would have been plenty to choose from, all familiar to the audience. At the very least, the Winterland’s universal voice would have said, “Aw, man, I know this tune,” as opposed to, “Huh…? Dry your what…?”

And how would have that sounded if Neil had played something surefire? What if, for example, he went all the way back, to his first single, “Solitary Man” from 1966? It might have sounded like this, which is his performance in Australia six months before The Last Waltz.

OK, it’s definitely not as good looking as The Last Waltz—and Neil’s swapped his lapels and shades for rhinestones and leather pants. But that aside, I could imagine the Band backing him on this, with Garth Hudson providing sweeping organ fills and Robbie punctuating the lyrics with his fractured-note style. (That night, the Band did an excellent job of making sure their guests did not sound like oldies acts.)

And then maybe in 1983, the 13-year-old version of me—a Neil Diamond skeptic—would have sought out the original version of the tune, and embraced it, and become one of those gung-ho NeilHeads you meet every now and then.

So my parting advice to anyone who’s written off Neil Diamond because of his 3 (long) minutes in that great, great film, The Last Waltz: Don’t give up on the Man. Check out the recently released The Bang Years 1966-68 collection and you’ll hear some timeless music.

And for those Neil Loyalists out there who defend him to the grave and insist on putting that 1976 performance on a pedestal, just remember this: that was the only time Neil ever performed “Dry Your Eyes” live, so perhaps Neil himself isn’t a fan of his performance that night.

Me and the Colorful World of Oz

Time to tell you a little about myself. As a lifelong fan of Film and Music who was immersed in it professionally for a long time, I think I have some observations you might find interesting or entertaining.

For a half-dozen years, last century, I was a sound editor for independent films in NYC, and since then I’ve produced docs and non-fiction television TV. Briefly, I was generating bonus content for DVDs. In other words, I’ve had all kinds of experiences, some with celebrities old and new, and those escapades will figure into my posts (my Tales of Scorsese are bottomless). But mostly I’m going to dissect films and songs that I love, frequently griping about aspects and trends that annoy me. Also, I’m a big supporter of audio commentaries, and when I hear something especially cool on one, I’ll post portions.

To the Velvet Underground fans out there, my URL is a semi-obscure VU reference, but in this context, I’d like to think that I’m peeling away the layers of art, both high and low, and revealing the wonderful riches underneath. And hopefully prompting some nice discussion as well.

But, hey! Enough of my yakkin’. What do you say? Let’s boogie!

We all remember the moment in The Wizard of Oz when Dorothy leaves her home and enters Oz, especially because it takes us into the color portion of the film. And the geeks reading this probably already know that those first 22 minutes of the film were broadcast in B&W–instead of the original sepia—until 1989. And the observant folks know that the first shot in color has the door frame to the house painted in sepia so it appears to be in B&W until Dorothy opens the door…

But I just noticed this and think it’s really awesome: The woman who opens the door is not Judy Garland. It’s her stand-in wearing a sepia version of Dorothy’s blue-and-white dress:

Then when she steps back out of frame, Judy Garland walks through the door:

And please don’t take this as a rant against computers or CGI or the way they make films now. I’m just enamored with the fact that I’ve seen this film many, many times and never noticed that aspect to the shot. I was always too busy looking at the sepia-painted walls around the door!