Last week I posted some Polish film posters with their identifying information blurred out. Traffic was strong, participation not so. Well, what can you do? I’m still just getting up to speed here.

You can see the blurred versions at the original post, but here they are in their unadulterated form.

Considering the Sex and the City franchise is so firmly in place, it’s surprising that in Poland they’d create something so different, something that doesn’t use Sarah Jessica Parker’s face.

The Shaggy Dog (1959), the one with Fred MacMurray. Yeah, even Disney got the highly-imaginative Polish treatment.

I’m at odds with this one. True, it does evoke one of the most sinister elements of Altman’s 1975 film–it may even be a kind of a spoiler (I have to be delicate here since I don’t want this post to be a spoiler!)—but it’s just so horrific it could be counter-productive to welcoming people into the film Still, on its own terms, it’s striking as Hell.

Tagged as Mel Brooks, Nashville, Polish Film Posters, Robert Altman, Sex and the City, What's That a Poster For

Sid Caesar & the Sight Gag that Got Away…Almost

Mel Brooks, Neil Simon and Woody Allen all wrote for Sid Caesar in the 50s1  .  When their writing and filmmaking careers were riding high in the early 70s, someone put together a ninety-minute film called Ten from Your Show of Shows. It was exactly as described: ten sketches from the legendary series that aired from 1950-54 and starred Sid Caesar, Imogene Coca, Carl Reiner and Howard Morris2  . 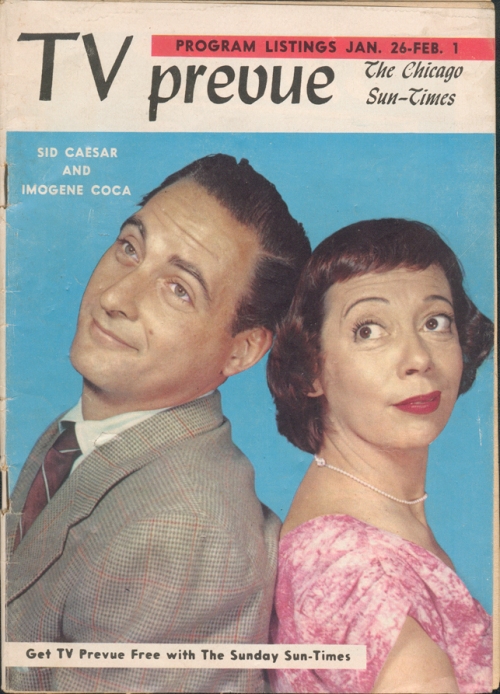 (For the uninitiated, it’s very hard to describe the humor of Your Show of Shows. I could say something clever like “With one foot silent film comedy and another in zany cartoons, it’s all held together with a tight borscht belt,” but it’s best to see for yourself, which you’ll have a chance to do before this post is done. Oh, and there’s also YouTube.)

As a kid, I was a fan of Brooks, Simon and Allen, and my folks would frequently tell me about Your Show of Shows, so when this film aired on the local PBS in 1984, my VCR and I were eagerly waiting. And, man, my hopes were high; thinking of the combined laughs I got from those three guys made me giddy at the notion of what they would write collectively. (I was unaware that Allen and Simon did not have a hand in any of the sketches in this film.)

So I watched with very high expectations. The first two sketches have some incredibly funny bits, but there’s a sight gag in the third sketch (“The Recital”) that I gave me what might be the biggest laugh of my teen years. At least from watching something on TV. I remember I saw it late at night and am pretty sure my laughter woke up my folks a floor above me.

In 2001, nine DVDs-worth of material from Your Show of Show and Caesar’s subsequent show, Caesar’s Hour, were released. Almost all of the sketches from the 1973 compilation film made their way to these DVDs, but sadly “The Recital” wasn’t one of them.

And so it was time to drag out my 24-year-old VHS tape and pump this sketch into the computer. And here it is, all 4 minutes of it, with Sid Caesar and Imogene Coca.

Want to take a guess at the joke that did me in? (Hint: it gets one of the two biggest laughs from the audience. Another hint: it has “Mel Brooks” written all over it.)

BACK TO POST 1There’s a longstanding myth that Woody Allen wrote for Your Show of Shows, which is not true. However, he did write for Sid Caesar in 1958, for a short-lived program called The Sid Caesar Show. On the other hand, in 2001 Allen gave on-camera interviews for some Sid Caesar DVDs and spoke lovingly about his time spent with Sid. As those who know how little Woody talks to cameras about anything, I think this is adequate proof that he is proud of his time spent under Caesar’s wing.

BACK TO POST 2Howard Morris makes a cameo in another of my posts.

Filed under Comedy, Plucked from Obscurity

Mel Brooks and the Gassy Knoll

The campfire scene, or as we all know it ‘the Campfire Scene,’ in Blazing Saddles is the gross-out comedy film version of “Where were you when Kennedy was shot?” Mine is a common one. I first saw Blazing Saddles with my mother, my brother and a buddy of his, in a drive-in, in 1980.  (It was the middle of a triple feature; the opener was Oh, God! and the closer was Clint Eastwood’s The Enforcer. Lordy, what a 70s trilogy!) None of us had seen it before, but we were all fans of Young Frankenstein. Sure, there were plenty of jokes only my mother got, i.e. Hedley Lamarr, but we all laughed plenty. But then there was the Campfire Scene…

I laughed more than I ever had in my life. All of us did. The whole car was shaking. I remember hitting the dashboard with my fists, doubled over. In retrospect, I thought the scene had lasted minutes, but that’s what can happen when you stop breathing.

That was 1980. Now let’s go back to the summer of 1973. While Mel Brooks was finishing Blazing Saddles, he gave an interview to the late, great Crawdaddy! , the first U.S. magazine of rock and roll music and pop culture criticism. The article ran that October, four months before the film’s release. Even though The Twelve Chairs, his prior film—and his second film—flopped, which might have condemned him to One Hit Wonder status for The Producers, he was incredibly confident in his conversation with interviewer Peter Knobler. He knew he had a hit on his hands. What really caught my eye is how liberally he quotes his film—verbatim (i.e. “Somebody has to go back and get a shitload of dimes!”)—at times spoiling plot points. This seems unusual for an article he knows will be published before his film is released.

But when he describes the Campfire Scene, he does something particularly interesting. Here’s the quote:

“Fifteen guys sitting around a campfire…And I have a close-up on beans. Pull back…a greptz [burp] to begin with. And then fifteen guys…farting…for two minutes.”

OK, now, since we can never get enough of this, let’s watch it again, with Mel’s quote in mind:

The actual hardcore ‘action’ in the Campfire Scene is less than 40 seconds, so why does he say “two minutes”? Because Mel Brooks knows that in print “farting for 40 seconds” isn’t funny and that seeing farting for forty seconds will feel like two minutes. To verbally describe that scene accurately would be a disservice to the impact of the scene.

In my case, I know after I saw the film I ran back to my chums and told them Blazing Saddles has “this scene where a bunch of guys fart for ten minutes!”

Feel free to share the story of your First Time.

By the way, I must plug the book Very Seventies: A Cultural History of the 70s From the Pages of Crawdaddy!, edited by Peter Knobler and Greg Mitchell. It’s great profiles, interviews and reviews about that decade. I half expect more blog posts to be inspired by the essays in this book.

Also, if you’d like more insight into the inexplicability of being “funny,” check out Dick Cavett’s 2007 NY Times blog entry, “A Life in Rim Shots”.