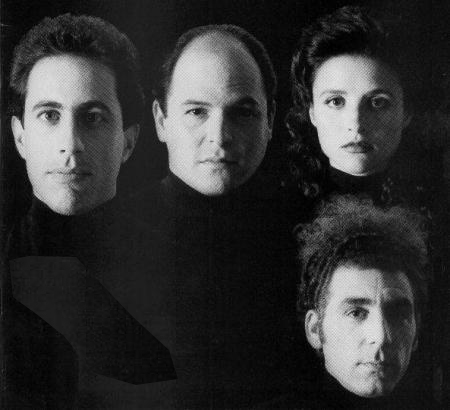 Two weeks I did a post that was in part about pop culture references on 30 Rock. I certainly enjoy their frequent nods to all-things-geeky, but my heart belongs to Seinfeld. While 30 Rock creator Tina Fey tends to be meta in her approach, Jerry Seinfeld and Larry David just love using their favorite films and TV shows as punchlines, especially references to old comedians, which makes perfect sense when you think, well, the show is about a stand-up comic.

While re-watching several seasons’ worth of Seinfeld recently, I was struck by how high-end their lowbrow was. Some of their references seemed beyond the reach of the average primetime TV viewer of the mid-90s (a point typically driven home by the use of a laugh track to “sweeten” those jokes that failed to get a large response from the studio audience). Ozzie Nelson’s fashion sense, the lyrics to the theme song of The Patty Duke Show, and Kris Kringle speaking Dutch in Miracle on 34th St were all referenced without explanation. Either you got it or you didn’t.

This 3-and-a-half minute quiz has 7 clips from Seinfeld, each punctuated by a joke that banks on your knowledge of popular culture of the last 80 years. When you’re done, click “Keep reading” at the bottom of the page to see the answers. (Hey, at the very least you get to see a few minutes of great gags from Jerry and the Gang!)

END_OF_DOCUMENT_TOKEN_TO_BE_REPLACED

The folks behind 30 Rock know their core audience is obsessed with popular culture and has been (clearly) raised on TV. Their Trivial Pursuit-like references test the intelligence of even the geekiest of fans, and the May, 2009, episode “Kidney Now!” has one of the best. NBC page Kenneth is helping Tracey Jordan though the trauma he experienced in a high school science class, and they are interrupted by Jack Donaghy’s father, played by Alan Alda…

Alda’s line about a “chicken and a baby” is an explicit reference to a crucial scene in the series finale of M*A*S*H, “Goodbye, Farewell & Amen,” which aired in 1983. For those who need a reminder, here’s 90 second clip, edited down to its bare essentials. Hawkeye Pierce, played by Alda, is in an army psychiatric hospital recovering from a nervous breakdown. He’s telling his doctor (Allan Arbus  1)about the experience that triggered it: He, his fellow soldiers and some Korean refugees were in bus hiding from an enemy patrol, and a woman’s chicken wouldn’t keep quiet…

I loved the joke on 30 Rock (the “It was a baby!” moment has been a touchstone with my crowd for years), but my wife missed it. In fact, most of the people I asked—peers, mind you, also in their early 40s—missed it. But certainly they had all seen it. Everyone did. The finale to M*A*S*H is one of the most watched events on TV (let me be clear here: the series finale of The Sopranos was watched by 12 million people, whereas the M*A*S*H finale had 121 million viewers), and yet today one of its most memorable moments (good or bad) might as well be an in-joke.

Naturally, this is due in part to its age: the M*A*S*H finale aired 26 years before the 30 Rock season finale. But that’s not the only reason most people missed that joke, as far as I can see. M*A*S*H the Series must be one of the biggest examples of a cultural phenomenon that has an incredibly weak lasting impact. Incredibly weak. 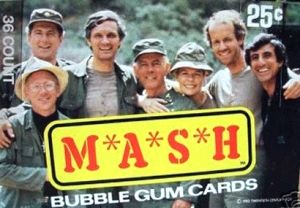 M*A*S*H was a massive media machine its last few seasons, with non-stop press, awards, books, calendars, clothing, etc. My God, it was sick. (Who wouldn’t want their kid to be Max Klinger for Halloween?) And I’ll freely admit that I drank that (Un)Kool Aid. Sure, I preferred the older episodes (and continue to have a soft spot for the first few seasons), ones I could see 10 times a week in syndication, but I was thrilled to be watching the new episodes, being a part of truly popular culture. And, yes, I was psyched for that finale, having my own M*A*S*H party (everybody did) and proud it received such ginormous ratings, beating the record set in 1980 by Dallas’s “Who Shot J.R.?” episode (screw you, Larry Hagman!)

But, wow, did that show become yesterday’s news fast. And revisiting it (for the sake of this post) it’s not hard to see why. Jesus, what a self-important mess. Plodding, pompous, preachy (the 3 P’s of Bad Television). Unfunny to the nth degree, too. And Mike Farrell’s mustache may be the worst TV has ever seen.

Mind you, in the 80s, there were several critics who said exactly what I just did. They were right on the money in their contemporary assessment (but I ignored them a bunch of naysayers). None were more astute than the Usual Gang of Idiots at MAD Magazine. In October, 1982, they brilliantly skewered the show’s de-evolution from situation comedy to sanctimonious pulpit. It includes one of my all-time favorite MAD panels:

And that laugh-out-loud piece of business brings us back to Alan Alda, the actor who in the last seasons became the show’s driving force (he was a frequent writer and director). Presumably, the show’s holier-than-thou, War-is-Hell attitude was an extension of his own beliefs, and in the wake of the show, he laid low for a few years. He graciously gave us all a break, perhaps because of burn-out, perhaps hiding from the unavoidable backlash in the wake of such tremendous success.

But beginning in 1989, he stole scenes as Lester in Woody Allen’s Crimes and Misdemeanors (“If it bends, it’s funny…”) and reinvented himself as a character actor with a knack for playing assholes, liars and egomaniacs. And the Band Played On, The Aviator, Flash of Genius  2, and ER all benefited from his contributions. (Full disclosure: I’ve never seen him The West Wing.) In 2005, he played Shelly Levene in a Broadway revival of Glengarry Glen Ross, and, man, it was something to behold. (This was Jack Lemmon’s role in the film version, and Alda made it his own.)

(Besides the plethora of memorable supporting roles, there’s an oft-told story that endeared Alda to me as well: Sometime in the last decade he attended an dinner ceremony for Queen Elizabeth II and while standing in the reception line, he realized he was next to Donald Sutherland, who originated the role of Hawkeye Peirce in the film version of M*A*S*H. Alda leaned over to Sutherland and whispered, “Thank you for my life.” I love that story.)

I can’t imagine what Alan Alda means to someone who didn’t live through the 70s and 80s. I suppose to the young’un’s who care, he’s exactly as I described: a superlative character actor who tends to play a jerk. (The IMDB lists his acting trademark as “often plays ambitious authority figures that are corrupt and unethical.”) But 30 years ago he was so much more: actor, writer, director, activist, male feminist, peace-loving TV preacher, and possibly one of America’s first metrosexuals. Honestly, he did not come across as someone with a sense of humor about himself, much less an actor who’d go on a show and poke fun at his precious M*A*S*H.

Frankly, this whole post began because of Seinfeld. I’ve been re-watching seasons 4 though 7 and marveling at the abundance of references to ancient or arcane pop culture. For example, in one episode (“The Hamptons”), in a matter of minutes, there are references to The Graduate; Johnny Carson’s mannerisms; Tang and the Space Program; and the theme song to the Bea Arthur series Maude. I saw an episode last night where a punchline was “Hey, it’s better than Dondi”!

And so stay tuned for a future post: the Seinfeld Pop Culture Literacy Test!

(By the way, he M*A*S*H memorabilia photos came from the wonderful and thorough blog AfterM*A*S*H, by Rob Kelly. If you’d like to see someone intelligently pay tribute to the show and put it in perspective, pay him a visit.)

BACK TO POST 1 Yes, Diane Arbus’s ex-husband. How weird is that?

BACK TO POST 2 Flash of Genius (2008) is a film about the inventor of the intermittent windshield wiper, wonderfully played by Greg Kinnear. Alda, playing a lawyer, has only a few scenes, but he’s great. Frankly, whenever I hear he’s in a film I’m about to see, I say, “Fuckin’ A!”