When I saw Toy Story 3 a few weeks ago, I immediately recognized that the last shot of the film mimics the opening shot of Toy Story, bookending the three films with a kind of visual closure. (I have to be vague here for the sake of those who’ve yet to see Chapter 3 in the saga of Woody & Buzz.) It was a fitting ending. Perfect, really. I strongly suspected that even the clouds were in identical formation as on Andy’s wall in Toy Story.

A couple of weeks later, I took Harry to see it, Harry being my 3-and-a-half-year-old son and fellow Pixar junkie. Even though by the end of the film I was an emotional wreck (you could have picked me up with a blotter), I had enough composure to pull out my phone and snap a picture of the closing shot so I could do a handy-dandy comparison in Photoshop. Turns out I was right about the cloud formations: 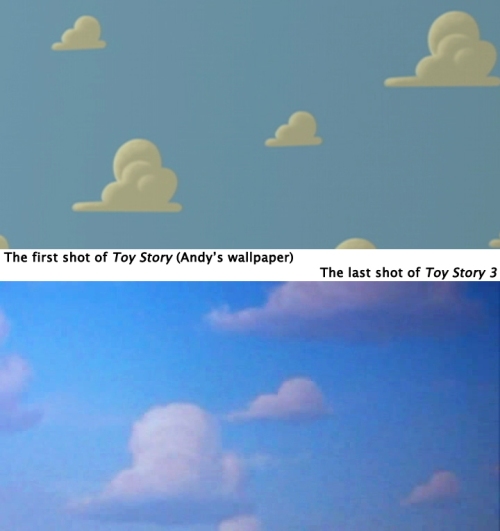 As cool as it is, however, I didn’t think this qualified as “blog post” material. This was so obvious an allusion that it would be silly to devote too many words to it. My prior Pixar posts dig deeper than just comparing shots between their own films. 1

So I put the comparison up on Facebook, which is a great place for things light, airy and fleeting. Moments later, my wife was the first to comment:

Since she was in her corporeal form only 20 feet from me, I continued our conversation in person (call me old fashioned): “It’s so obvious it isn’t even blog-worthy.”

“Oh, come on,” she said. “You could write something about that. Trust me: most people didn’t notice that clouds/wallpaper reference.”

I smelled a dare.

Let me explain a little about my son. He’s good at shit like this. He’s got a steel trap of a memory. For example, when he was 2 years old, if WALL•E were playing in another room, he could tell us what scene it was just by listening to the sound effects and music cues. OK, OK, I know I’m just a proud Dad and everyone thinks their kids are geniuses or Mozart-esque, blah blah blah, but trust me: when it comes to this kind of thing, he’s got the goods.

So, I put the Toy Story 3 still on my computer screen and called Harry into my office…

So either my kid is way too much like me or I’m onto something. But, hey, at least I got a post out of it!

BACK TO POST 1 Shoot, I’ve blogged about Pixar films in relation to John Ford, Nichols & May, Schwarzenegger violence and obscure sound effects from Raiders of the Lost Ark. 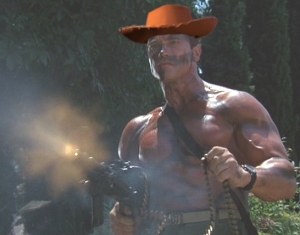 For the first four Sundays of this blog-thing, I’ve written about Pixar films (here, here, here and here). And now, here’s another.

Commando (1985), directed by Mark L. Lester, is Arnold Schwarzenegger’s first starring role after The Terminator and is perhaps the apex of his comicbook/video game style of “shoot everything and everyone in sight” films. The body count is extreme, to say the least, and it’s influence can be felt on Pixar’s Toy Story. Well, kinda.

Here’s the deal. This minute-long scene from Commando might be its most famous. Arnold’s character, John Matrix, is trying to infiltrate the mansion of a drug kingpin and gets cornered in a toolshed. Needless to say, he relies heavily on toolshed staples (i.e. a circular saw blade) to get him out of this jam. Here’s the scene in its Director’s Cut form; pay particular attention to the ending, when Matrix understandably machetes a man’s arm off.

This scene was conceived on location, where imaginations run wild, and according to the audio commentary by the film’s director, Arnold was making suggestions: “So Arnold cuts off this guy’s arm and he wanted to pick it up and and slap his face with his own hand and then throw it at him. That was Arnold’s idea. And I thought that was too much. [laughs]”

So where does Toy Stoy fit in? Watch this clip—when Woody brings a “drunken” Buzz to his senses—and notice what Woody does with Buzz’s dismembered arm.

Obviously, I could go on about how cartoons have the freedom to behave in ways real humans can’t, blah, blah, blah, but what’s the point? I just like the fact that these geeks heard of a great gag and didn’t want to see it go to waste. (I also like that this whole narrative isn’t complete until you’ve listened to both audio commentaries, of which I’m probably one of the only people who ever has.)

You don’t need to be a hardcore film buff to realize that Pixar stockpiles their films with references to other films, generally of the sci-fi nature. Here’s a typical example, from Toy Story 2…

(Personally, I love the touch of mimicking Luke Skywalker’s fall by having the camera staying static and the elevator descending.)

Today I’d like to examine another one of their film references, one which gets even cooler under scrutiny. It’s from Toy Story and the homage is pretty obvious to even the casual geek. When Woody tries to knock Buzz behind the desk, there’s a wonderful tip of the hat to Raiders of the Lost Ark:

However, in the audio commentary, they reveal that they go deeper than you think. Since the sound FX were done at the Skywalker Ranch (where Raiders was sound edited), the Pixar guys were Geeks with Privileges:

DIRECTOR JOHN LASSETER: When we were designing this scene, we were sitting there watch Raiders of the Lost Ark, and…It’s the actual sound of the big boulder rolling…And even the sound of the pushpins flying down and hitting on the desk around Buzz—those are actually the sound from that sequence, the arrows at the beginning of Raiders of the Lost Ark!

So, yes, the visuals come from the boulder scene in Raiders. That’s hard to miss. But pulling the literal sound FX from Raiders? That’s cool.

In a future post, I’ll breakdown another Pixar film reference, one that’s even geekier, which therefore means, cooler. (Anyone want to guess what it will be?)