W.C. Fields Suffers the Weight of the World

Beginning tomorrow, Friday, April 22nd, New York City’s Film Forum, will have a 12-day W.C. Fields film festival, showing most of his films (all 35mm prints!). So it’s a perfect time to share some of my observations on Mr. Fields. I think most people nowadays—those unfamiliar with his films—would characterize his iconic persona as ‘a drunk who doesn’t like children.’ There’s a lot of truth to that interpretation, but there was much more, something that I became more attune to as I got older. The characters in his domestic comedies (i.e. The Man on a Flying Trapeze or The Bank Dick) endured a very deep suffering. The struggle of being a husband, a father, a provider is a theme I began to appreciate as I’ve moved on in years. Subsequently, my aching laughter when watching his films has evolved into empathy.

A case in point is It’s a Gift (1934), generally regarded as Fields’s masterpiece and the film that kicks off the Film Forum Festival this weekend. Fields plays Harold Bissonette, a family man and owner of a grocery store, who suffers endlessly at the hands of his wife, children, customers—even his neighbor’s children–all the while dreaming of buying an orange grove in California. Most scenes are set-pieces, isolated sketches, typical of comedies of the early 30s; for example, early on, in his store he concurrently battles an enraged customer demanding kumquats, an inept employee, and the blind, near-deaf, cane-swinging Mr. Muckle. It’s sisyphean comedy at its best. It’s not unlike scenes from his earlier shorts, i.e. “The Dentist,” but thanks to the context—a middle-aged man pursuing his dreams against tremendous odds—the pain in these scenes is all the more painful.

I think my point is shown best midway through the film. It’s nighttime and having already endured endless hen-pecking from his wife, Harold takes his pillow and blanket outside (A). Thus begins an 11-minute sequence, where he tries in vain to sleep on their apartment balcony (B). Although the clock says it’s 4:30am—when all the world should be asleep–he’s unknowingly moved into the eye of the storm.

In short order, he’s tormented by a falling cocoanut (1), a bottle-clanking milkman (2), an ice-pick-wielding toddler (3), and a continuation of his wife’s needling (4).

He’s even harassed by an insurance salesman…

In my teens, the funniest part of this scene was the prolonged spelling of the ridiculous name “LaFong,” however, as an adult/husband/father/freelancer trying to eke out a living, I’m struck by the sad, sad irony of trying to sleep while a man cheerfully tells you you’ll have to work every day until you’re 90. That’s when my laughter turns to fatigue. And fear. And bonding. If you listen closely, at the end of the clip, he emotes under his breath, “If I could only retire now.” No wonder at one point later in the scene, he looks at the camera—at us—as if to say, “See what I have to deal with?”…

The film is such an endless gagfest, it’s easy to miss its most subdued moment, its most poignant. Harold’s just used a recent inheritance to purchase an orange grove, much to his wife’s dismay. She badgers and bemoans, all of which he takes without rebuttal, like any beaten man would. However, at the end of the scene, he quietly tells her, as he’s leaving the room, that he’s sold their grocery store, a selfish act that will uproot his family. Her shock and outrage tells us he’s never done anything like this before. 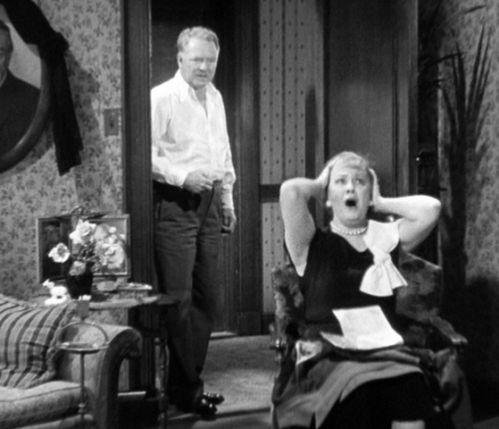 But it’s Fields’s delivery that is so effective. There’s no fanfare, no argument, no “I’m putting my foot down!” outburst. He just says it. Because if Harold didn’t seize control, didn’t act impetuously, didn’t instigate change with his own hand, then all the other suffering would truly be unbearable. And so when he tells his wife that he’s irrevocably changed their lives, it’s the film’s Moment of Clarity, Harold’s quiet assertion of controlling his own destiny.
__________________________________________________

For further reading I steer you to “Godfrey Daniel!”, an excellent piece by Ivan G. Shreve, Jr., on the blog Edward Copeland on Film. Shreve and I share a similar take on Fields’s film persona, and he astutely observes that his characters “suffer the slings and arrows…with a Zen-like stoicism that instantly puts the viewer in his corner.”

I also heartily recommend going to Film Forum and seeing any of Fields’s films with a packed house, which is how his films were meant to be seen. You shouldn’t take anything I’ve written here as an indication to look for something deeper, certainly not at the sake of laughing your pants off. But it’s there. It doesn’t make the films funnier; it just makes them more than funny. 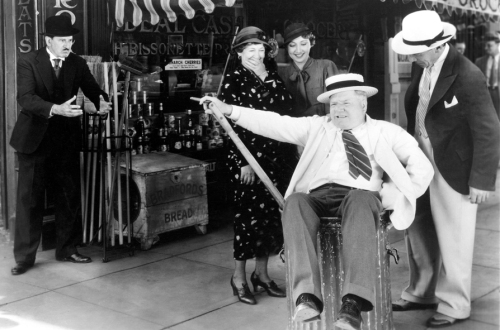 (By the way, I may not make it to Film Forum this weekend, where It’s a Gift is sharing a bill with “The Dentist.” If anyone does, please tell me which print of the latter they use. For further explanation of the various prints of the film that exist, check out my post W.C. Fields and the Musical Laughtrack.)

Tagged as Film Forum, It's a Gift, The Dentist, W.C. Fields

3 responses to “W.C. Fields Suffers the Weight of the World”